After an issue #6 appearance that left comic book fans slack-jawed, Robin returns to Gotham City just in time for the Holidays when Batman Urban Legends #10 arrives in comic book stores and on participating digital platforms on Tuesday, December 7,

Written by Meghan Fitzmartin, the feature-length story “A Carol of Bats” features art by Alberto Albuquerque Jimenez (pencils/inks), Nick Filardi (colors), and Pat Brosseau (Letters). This continues Tim’s journey of self-discovery from Urban Legends #6, and sees Tim balancing his drive to fight crime with his desire to be a great partner. Amidst the ashes of a devastated Gotham City and Fear State, Tim Drake comes back to Gotham City to help Batman and Nightwing try and put the city back together again after its devastation at the hands of The Scarecrow and The Magistrate. Along the way, Tim tries to get Batman out of a Scrooge-level funk, where the Dark Knight has serious doubts about if he’s failed Gotham City, and if its citizens will stop being scared and angry enough to have hope for the future.

“The response to Tim’s story has been more than I could have hoped” said writer Fitzmartin. “It’s always exciting to share Tim’s journey with fans, and close 2021 with this special holiday story in Batman Urban Legends #10.”

Featuring a main cover by Belen Ortega, who’d previously drawn the Tim Drake story “The Sum of Our Parts.” and a powerful Azrael variant by Riccardo Federici, Batman Urban Legends #10 also includes another feature-length (22 pages) Nightwing tale, by writer Tini Howard, making her first DC story since 2016. Howard will take over as writer of Catwoman beginning with issue #39 in January. Featuring art by Christian Duce and colors by Sarah Stern, this follow-up to the events of Fear State follows Nightwing around the holiday season, avoiding attending the Bat-Family holiday party before he’s doused with Fear Toxin and forced to relive memories of his past, present, and future shown to him by three ghostly versions of Batgirl – Barbara Gordon, Stephanie Brown, and Cassandra Cain.

Writer Dan Watters and artist Nikola Cizmesija conclude the three-part Azrael tale, “Dark Knight of the Soul,” with colors by Ivan Plascencia. In his return to Gotham City, Jean-Paul Valley faces off for a final time with the new villain Poor Fellow, who has a lot more to tell Jean-Paul about the legacy of Azrael than he ever knew.

Rounding out this issue is the heartbreaking close of the two-part story featuring the terrorizing twins Tweedle Dee and Tweedle Dum, written by Punchline co-writer Sam Johns and Injustice: Unkillables artist Karl Mostert.

Earlier in the year months ago, Batman: Urban Legends #4 featured Tim Drake – Robin – in the strip “The Sum Of Its Parts” by Meghan Fitzmartin, Belen Ortega, and Alejandro Sanchez. With Tim Drake looking at his future plans, reassessing his life, with Barbara Gordon telling him that “what you find is going to change you.” He was meeting an old friend of his, Bernard, who last appeared many, many moons ago while ignoring the current threat to Gotham of the Chaos Monsters. There was some excitable comment on social media, but it seemed pretty much innocent, even with trousers that tight. Just two old friends meeting up again after years. 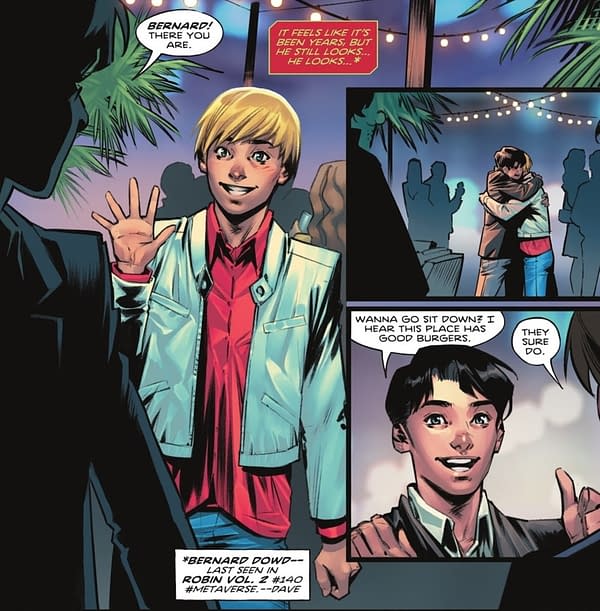 “He still looks… he still looks…” Tim and Bernard meet up, share a hug, they chat… but those ellipses hang in the air. Of course, at that moment, Bernard gets kidnapped by the bad guy that Drake could have been dealing with but wasn’t. But in Batman: Urban Legends #5 out last month, there’s a little less subtextual and a more obvious take over what was going on. With Spoiler emphasising their former relationship. 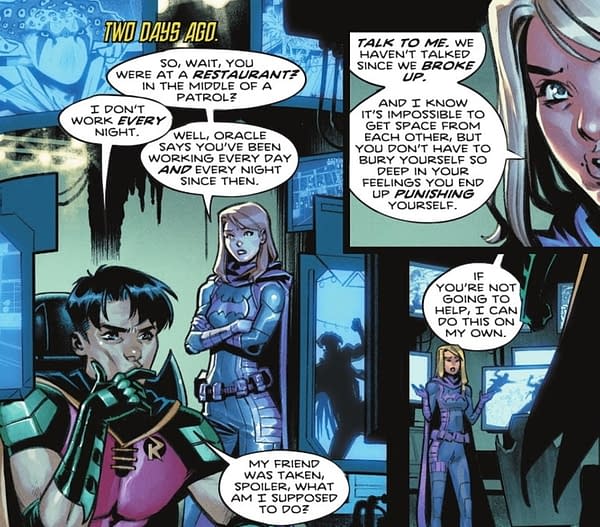 We also get more background. That Bernard’s parents never liked Tim Drake and wanted a “perfect” life for their son – and Bernard didn’t match up. With Tim calling Conner Kent for advice and describing Bernard as “a… friend”, heavy on the ellipsis again. The final part of the story is published today. Except it won’t be anywhere near as final as some would like and may well underline the concept of “queerbait”. first, as Robin, Tim Drake rescues Bernard, though he doesn’t need too much rescuing, it seems, even if he admits to being obsessed with Robin, which is handy. 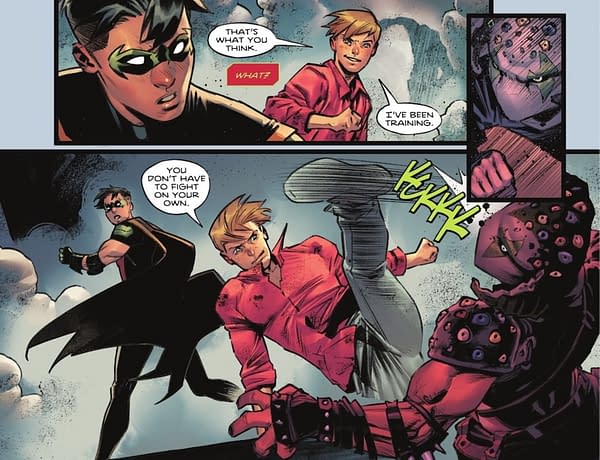 And though Bernard is not supposed to know that Tom Drake is Robin, he clearly does. Then he uses very specific language. 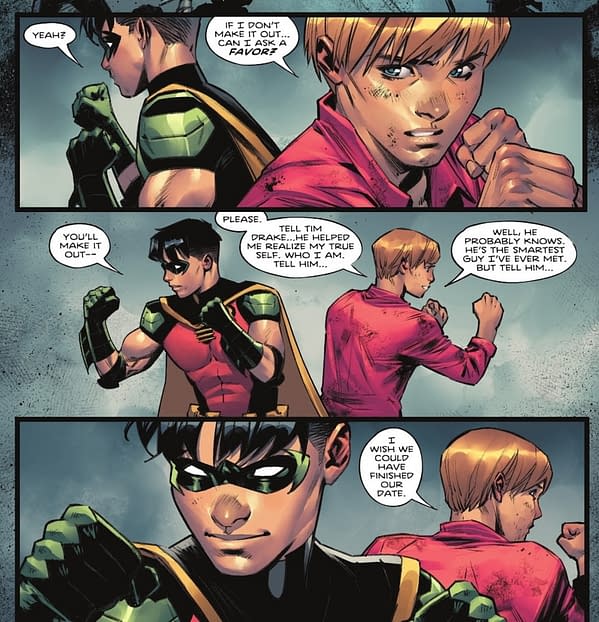 Even in Gotham, a date is a date. And at the conclusion, Tim Drake is happy to return the word choice. 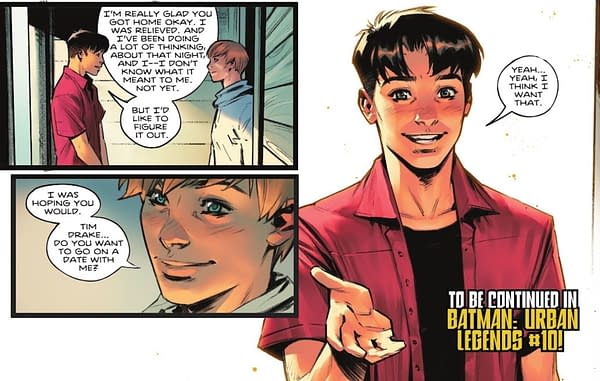 Tim Drake going on an official date with Bernard. Not sure what’s going on. Wanting to figure it out. Will Tim Drake be portrayed as a bisexual young man? Might Bernard be part of that aspect going more public?  Why, yes. Despite keeping it ambiguous in the comic, DC Comics then made it all official.. And even TMZ found a new take, quoting the granddaughter of the founder of DC Comics, Dana Wheeler-Nicholson in favour of the move…